The United States undermined the S-400 agreement with India and tried to make it “obey orders”: Sergey Lavrov

There is a lucid vision behind China’s maritime development

The defense industry lobby group, the Australian Strategic Policy Institute, appears to be underfunded. Nothing else can explain the appearance of its executive director Peter Jennings on the opinion pages of the australian, evoking a fictitious version of a Chinese offer to seize Taiwan.

We find it rather strange that Jennings is trying to write this kind of fancy stuff after US President Joe Biden insisted that he and Chinese President Xi Jinping both affirmed their commitment to existing Taiwanese policy during the September talks.

In addition, the news that an online summit is planned between the two leaders has also been released. The United States likely did this to try to calm things down, given reports that Chinese planes were flying near Taiwan in increasing numbers.

As Americans try to calm things down, Jennings prefers to turn up the volume and indulge in fancy scenarios.

{laodposition sam08} ASPI’s annual report for 2020-21 appears to be ready, but has not yet been placed on its website. The only part of the report that has been posted on the web is the distribution of funding for 20-21.

When you look at the list of ASPI sponsors, you can see why things are not looking very bright for Jennings. Quite a few have fallen since I last wrote about the institute, including shipbuilder Austal and MBDA Missile Systems.

In view of Australia’s dropping of the contract with France for the construction of submarines and the adoption of a new agreement with the United States and the United Kingdom to acquire nuclear submarines instead – which might not happen until the 2040s – Jennings could also lose the Naval Group as a sponsor within next year or so.

In the latter group as well, Jennings saw a few sponsors call it a day, among them the Australian government department Services Australia. 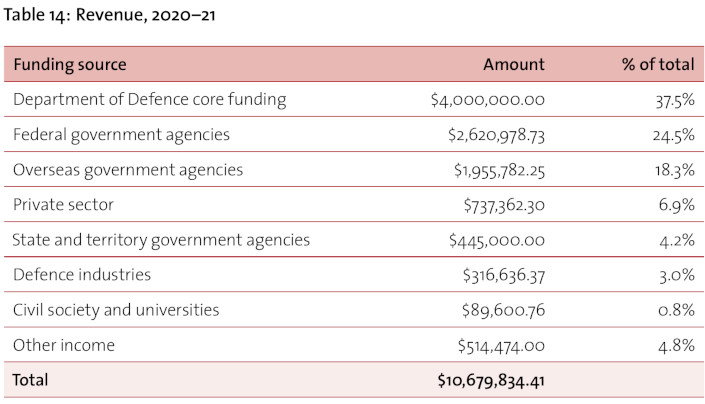 With money pouring in from all of these sources, it’s a mystery how ASPI calls itself independent and non-partisan. His deception is endlessly aided by newspapers like the australian and the CBA does not clearly identify who Jennings’ supporters are.

Jennings has every right to propagate her own opinions, however inflammatory they may be. But one should have a clear idea of ​​who is funding the show; whoever pays the Pied Piper sets the tone and Australians need to be clear who the payer is. And he never does that.

ASPI has a deal to receive $ 4 million per year in grants from the Australian government from 2018-19 to 2022-2023. An additional $ 5 million was allowed for an American office.

Jennings’ tactic is well established: increase the fear factor for countries in the region to source arms. The arms industry will laugh all the way to the bank and leave a few more crumbs for the ASPI. The United States and the United Kingdom were doing this in the Middle East in the 1980s and 1990s, despite the fact that the weapons supplied to countries in that region would be needlessly used to shed blood and not to defend against attack.

In December of last year, Jennings was beat the drums of war at the same time that many business leaders and some politicians called for moderating the rhetoric between Australia and China due to the fact that Beijing is an important export market.

In his last editorial, Jennings said, “The Taiwanese may estimate a three-year delay before an attack, while the US military command at INDOPACOM in Honolulu considers that a military assault in six years is possible.

But, of course, Peter Jennings, the noble warrior that he is, sees it differently and would like to put Xi Jinping in front of the shirt right away.

Screenshots of the distribution of ASPI funding.

iTWire TV offers unique value to the tech industry by providing a range of video interviews, news, views and reviews, and also provides the ability for vendors to promote your business and marketing messages.

We work with you to develop the message and conduct the product interview or review in a safe and collaborative manner. Unlike other YouTube Tech channels, we create a story around your post and post it on the ITWire homepage, linked to your post.

Additionally, your maintenance post message can be displayed in up to 7 different post views on our iTWire.com site to drive traffic and readers to your video content and downloads. This can be a significant lead generation opportunity for your business.

We also provide 3 videos in one recording / session if you need them so that you have a series of videos to promote to your clients. Your sales team can add your emails to the sales materials and footer of their sales and marketing emails.

Get the latest tech news, views, interviews, reviews, product promotions and events. Plus fun videos from our readers and customers.

Bill LaPlante, who left the Pentagon in 2015, has spent the past six years working …